One of our customers, a leading manufacturer of torque transfer solutions (including transmissions for OEMs like Ford and GM), presented a unique challenge to Pyramid Plastics – A Division of Pyramid Molding Group, in the form of an oil baffle.
The challenge, however, was not molding the part, but designing it. The customer’s team of engineers needed an injection-molded part that would help them fill the cavity inside their new transmission, built to provide stability and efficiency. According to the design requirements, the part needed to be 221 grams; anything weighing more than 221 grams would throw off the balance of the transmission.
The customer initially provided Pyramid Plastics with a solid part model weighing 980 grams, meaning we needed to engineer a 77% reduction in weight.

In the injection molding industry, there are a few pre-existing techniques to reduce the weight of a part.
One such technique is to use a foaming agent. Pyramid has a large base of vendors and material specialists with whom our engineers worked, and during one such meeting, it was confirmed that foaming agents can reduce the part weight by 12%, but more dosage would cause the part to disintegrate.
The second technique our engineers looked to implement was to use gas. This technique includes using gas during injection molding; the gas fills the inside of the part and reduces the part weight. However, after long technical meetings with the vendors and the end-user, we established that gassing would not work either; it would increase the cost of the part and the part might end up having a leak. This option also was rejected.
We decided to collaborate with our sister company, Industrial Molds, a state-of-the-art facility with over 150 years of combined experience as designers and manufacturers of production and prototype molds. Our engineering teams worked together to concept a technique to core out the part. This idea left us with two halves of the oil baffle part, so then all we had to do was to stick those two parts back together, meaning that plastic welding seemed to be the solution. It made sense to partner with Dukane, a global provider for plastic welding solutions, because of our long history of success working with them. Together with Dukane, we developed a new part design where both halves would be vibration-welded together. This technique is widely used in automotive and medical appliances.

The final iteration of the design was a shell of a part that was vibration-welded together. A seam was added around the part to provide enough surface for the parts to be welded together. Due to the limited space in the transmission, the size of the seam was restricted to only 30% of what was demanded by the welder. The most unique part of this weld was to capture the flash and debris. If any debris were to stay on the part, the part would fail in the transmission as it would have been surrounded by transmission oil. To deal with this, we designed a “trap” to capture all of the flash in the seam. Other design elements like ribs were added to provide a stable part without any sinks.

After several technical discussions with our customers, we all agreed that the design will work for the purpose and should go into production.
Due to a very tight timeline from this customer, we needed to complete the tool within 14 weeks. Generally, the lead time for such complex tool and welding machines are 18 to 20 weeks. By expediting the manufacturing process and using our state-of-the-art tooling manufacturing equipment, we were able to deliver our T0 samples by the end of the twelfth week. The parts were leak-tested and certified for up to 20 PSI, and would be able to withstand temperatures ranging from -20°C to 140°C.

Between Industrial Molds and Pyramid Plastics, our engineering teams delivered a customized tooling and molding solution which was initially thought to be impossible. By overcoming all the design and production challenges, Pyramid Molding Group has established itself as one of the leading suppliers to the automotive OEM’s. 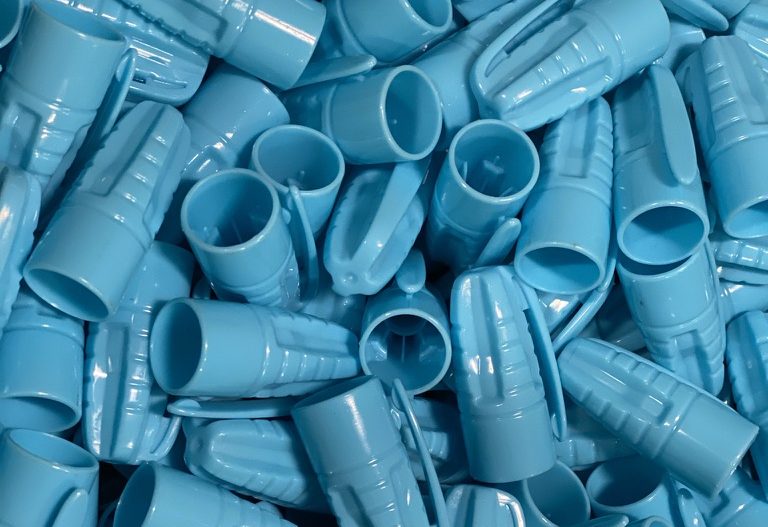